THE ARAB COMIX PROJECT: ARAB AND ARAB-DIASPORA GRAPHIC FICTION
Political and Editorial Cartooning
When making any piece of art, a political statement is made. Even when politics aren't the goal of the art, a statement still exists. Political Cartooning has been a way for many people to communicate their discomfort toward their government. More specifically by creating cartoons with political statements. In this website we will introduce Ali Farzat, Naji al-Ali,  Emad Hajjaj,  their works and the impact they had in political cartooning. As well as Tarek el-Tayeb Mohamed  Bouazizi a man who inspired The Arab Spring. With these authors and a bit of historical background, we hope to establish a digestible, approachable survey of some of the most important elements of political cartooning in the Arabic Diaspora. 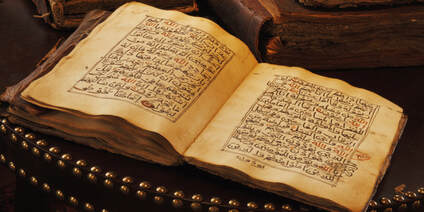 Source: History of the Qur'an: Wikipedia
Historical Origins and Humor in the Arabic Language:
The Qur'an's translations don't effectively communicate how the text was transforming linguistic styles of the Arabic language. Classic poetry/literature that followed the creation of the Qur'an would begin to experiment with humorous stylistics.  The Hija, for example, was utilized as a tool in verbal conflicts between warring tribes/nations. The raw translations show the text to be crude. But what's often lost in translation is the rhyming and syntax that reveal complex and unique elements of the language. These are some of the earliest moments of political humor. These traditions will grow and transform as the Arabic world changes throughout history. 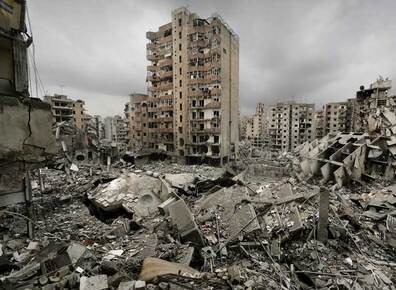 Source: CNN:https://www.cnn.com/2018/03/15/middleeast/syria-then-now-satellite-intl/index.html
Contemporary Cartoons and their Histories:
It is hard to find/construct a comprehensive timeline of what led Arabic political cartoons to what they are today. But what we can identify is the history and events that inspired artists to make their statements.  Cartoons serve as an alternative to conveying information as opposed to conventional media that is often controlled by power structures. Like graffiti and other art forms, political cartoons are usually attached to armed conflicts, events in politics, and often conversations about individual/national identity. Source: https://www.freepik.es/fotos-vectores-gratis/vintage-marco
Influences and the Path to Cartoons:
Experimentation with language and form had been occurring in the Arabic world ages before and after the Qur'an. In the 1950's and 60's, a new wave of Turkish Cartoonists brought about various radical ideas and explorations into their comics. What has limited certain forms of expression are religious and political bans on representations of Islam: "The Qur'an bans pictorial representation of the prophet Muhammad, whereas the Bible does not prescribe the same strictures for representing  Jesus"(Quassim).  These constricts are not only for religious reasons. Politics and systems of power have made large efforts in silencing these artists.  We suggest consulting the "Censorship" web page for a more details. 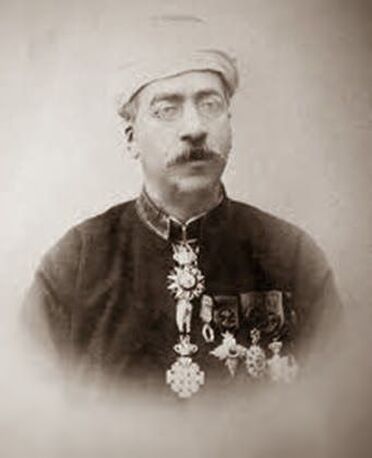 Yakub Sanu was journalist and cartoonist born in 1839 and died at 73 years old in 1912. He was born in Cairo, Egypt but went to Italy at a young age to study arts and literature before coming back to Egypt a few years later to start out as a journalist. He primarily wrote and analyzed plays, publishing them in a newspaper, and he even established the first theater in Egypt and presented about 26 plays himself ("Yaqub Sanu" and Abdulhamid), however his career actually wasn’t doing too well until he founded Abou Naddara in 1877, a satirical magazine which appealed to many people because it criticized the ruling powers (Rossano). Unfortunately, Sanu’s works we censored by the Egyptian government due to their “liberal and revolutionary” ideas and Sanu was banished to France by the royal family where he ended up continuing his work in the safety of another country. In France, Sanu tried something new, he published a magazine containing not only his satirical magazine work, but also political cartoons ("Sanu, Yaqub"). This magazine got big in France and was later smuggled into Egypt inside newspapers where his work also had a sizable impact on the people. Sanu spoke primarily about the political and financial hardships in Egypt and also coined the phrase “‘Egypt for Egyptians”’  which acted as a unifying force for the citizens against the British Control over Egypt and the royal family. Yakub Sanu  was a massive force that prompted uprisings and a wave of other political cartoonists ("Sanu, Yaqub").
​
​ 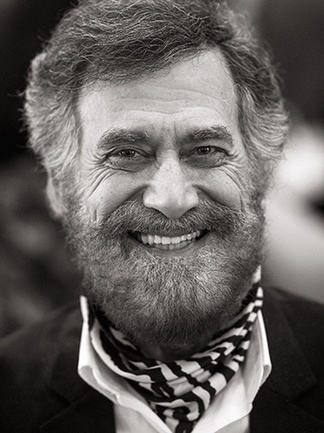 ​Ali Farzat was born in 1951 in Hama, Syria. And started his career at the age of 12, he drew professional drawings for the front page of the al-Ayyam newspaper. Over the years after his “debut” he started getting more and more into his most notable work, political cartooning. The main focus of his political work is criticising the Syrian regime, as well as other governments throughout the Middle East. In total Farzat has produced roughly 15,000 cartoons most of which relate to his main focus (“Ali Ferzat Syrian political cartoonist persecuted for his satirical caricatures”). When Farzat was 60 and was growing bold with his criticisms of the Syrian regime, a tragedy occurred; the president of the regime, Bashar al-Assad, decided to take action against Ali Farzat and sent several men to take Ali Farzat and shatter his hands. This action was meant as a warning, a way to make Ali Farzat quit his cartooning by making him unable to do so, but Farzat didn’t back down. After his hands healed, Farzat went straight back to his cartooning and did not falter from the “warning” he received (Wuerker). Farzat also received death threats from the previous president of Syria, Saddam Hussein, but this didn’t affect Ali Farzat either and went on with his work. Because of what he went through, Farzat was something of a catalyst for the public to start speaking out for democracy and Farzat received several awards for his boldness and unwavering courage. Some of the awards he received include: the Gebran Tueni Award, the European Parliament Sakharov Prize for freedom, and the Prince Claus Award (“Farzat receives prize for Syrian political cartoons” and “Ali Ferzat wins the 2011 Sakharov Prize”).

Background:
Naji Al-Ali was born in 1936 within the village of Ash Shajara, Palestine. His village was among the 480 that were removed in the incident named the “Nakba”, or known as the “Catastrophe.” This event occurred during the Israeli annexation of Palestinian territories. More than 750,000 Palestinians turned into refugees through  this process. Like al-Ali, this event and others that followed damaged countless lives and  notions of Palestine's home and national identity.

Mohamed Bouazizi and The Arab Spring

Shortly after Bouazizi was taken to the hospital. However he died on January 4th.  During Bouaziz's funeral his family wanted to carry his casket around the village specifically in front of the municipal offices where he had lit himself on fire. However, the police denied them permission and instead asked them to walk somewhere where they would be unseen. People became enraged and soon anti-government protests rose from the ground. Bouazizi was the inspiration Tunisians needed to fight for unemployment, housing, and food issues under a corrupt regime. However, at the time of his actions Bouazizi didn't intend to be the martyr Tunisians saw him as. He rather wanted to show his frustration towards the system that oppressed him. Nonetheless, The people revolted with the help of social media which aided them in spreading the word across not only their country but all over the world. Inspired by the effectiveness and global awareness of the Tunisian Revolution other countries such as Syria, Egypt, Iraq, Yemen among others started demonstrations of their own. little by little totalitarian rulers were forced to step down. This event would later be known as The Arab Spring.

Although Bouazizi was not a cartoonist, he did inspire the Arab Spring and other protests that helped overthrow authoritarian rulers. Many political cartoonist used this event as an inspiration for their cartoons. 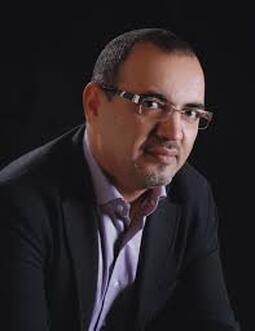 ​​Emad Hajjaj is a modern political cartoonist born in 1967 Ramallah, Palestine. And his works are published in newspapers so the general public can see his work and criticisms. Hajjaj covers a wide number of different topics, some of which being: the Egyptian revolutions of 2011, conflicts in Libya, feminist issues, and the civil unrest of the Middle East. Primarily, Hajjaj’s work is influenced by the Arab Spring, the series of anti-government protests and rebellions in the Middle East that started in the early 2010s. One of his more well known cartoon characters is Abu Mahjoob, a typical Jordanian man that Hajjaj based off his father. Through Abu Mahjoob, Emad Hajjaj speaks for the typical citizen of Jordanian and commentates on the every day political, social, and cultural concerns of the people of Jordan. And while Emad Hajjaj can be said to speak for the people in many ways, that doesn’t mean his work is appreciated by everyone. Hajjaj has admitted to the fact that he receives numerous threats, both over the phone and by mail, from the public. One reason for this is because of his depiction of King Abdullah II, the current ruler of Jordan. The depiction wasn’t offensive in any way, but it broke a taboo in Jordan that you cannot draw the king in a cartoon. Yet this act, Hajjaj says, is likely the reason he lost his job. Despite this and other events, Emad Hajjaj is considered to be “one of the most 500 influential figures in the Arabic world,” by the Arabian Business Magazine and has won the Dubai press Award twice. Emad Hajjaj is considered to be a “speaker of the people” with his cartoon character Abu Majood, and works to change the Kingdom of Jordan from the inside with his political cartoons.