What if you could harness one of the character attributes of Allah? What if it came in the version of a stone that granted you a superpower, for you to use for good or evil. The 99 follows random young people from all different backgrounds whose lives were turned upside down when the Noor stones chose them.  Dr. Ramzi Razem tracks the stones and takes the owners under his wing. Razem races to get the heroes before Rughal, a former 99 member, can collect the stones for his own evil plans. When crisis arise, specific protectors are chosen based on their unique powers to resolve it. The comic teaches the young heroes how to work together for the greater good, ultimately forgoing individual glory.

Allah is said to have 100 names, one of which is Allah itself, and if each disciple can learn all 99 of his name, the meaning of these names, and implications that these names hold and then you can enter paradise. However, you cannot learn the meaning of the name Allah because he is all of these attributions combined and holds the most holy power and knowing. That being said each name has an important meaning and has to be regarded as such. As quoted from the Holy Qur’an, “He is the Supreme about His servants” (6:18-6:61). In the comics, ​Naif Al-Mutawa had said he wanted to give Muslim children better role models and that The 99 could do that for them. The comparison between Allah’s other 99 names and The 99’s superpowers interact. As an example, it could be said that the Dr. Ramzi Razem is As Salam in the Holy Qur'an since As Salam is supposed to be The Ultimate Provider of Peace. This can be said since Dr. Ramzi Razem tries to bring The 99 together to fight off evil, to embraces themselves, and to ultimately fight off any evil.

The Reason Behind The 99

"With The 99, I wanted to make a difference and give Muslim kids positive role models." 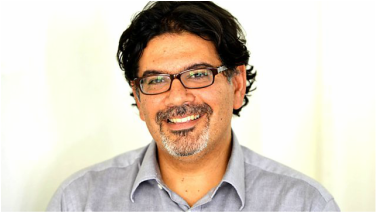 ​Naif Al-Mutawa has a PhD in clinical psychology and an MBA from Colombia University. While in a cab with his sister, he thought up the premise to the 99 while in London back in 2003. Mr. Mutawa says. "I don't expect Islamists to like my idea, and I don't want the ultraliberals to like it either," he says. (Fattah)

Mutawa wanted the comic to inspire Muslim youth to embrace their culture. He did not like seeing Palestinian territories profiting off of suicide bomber-stickers being sold to children while showing bloody scenes from intifada (Boustany). This only represented violence and death instead of the core values of Allah such as wisdom, generosity, and compassion. The characters do not carry weapons helping them to resolve situations in a nonviolent manner. Mutawa did this to “teach kids that there’s more than one way to solve a problem,” (Fattah) He also sought to end the culture divide for Muslim kids between the East and the West and make a balance of traditions and modern culture. Mutawa had experienced this having spent most of his adult life in the U.S. while he wrote children's books on assimilation, race, and prejudice (Fattah). His work is thus repairing and redefining Islam’s reputation by rebranding his characters in the market. Mutawa is normalizing Muslim youth by “inaugurating them into the realm of capitalism,” (Santo).
Mutawa did not want to create a line of “Middle East Heroes” like AK Comics had. He said, “I knew from the beginning that I wanted the 99 to look like an American comic book. I didn’t want the language or the art to be anything different or unusual. I didn’t want to use a Middle Eastern style, or try to invent one. I wanted to use something that existed. The only thing that would be different would be the Islamic archetypes,” (Santo). He wanted the comics to follow an Islam archetype by combining individual Muslim virtues to build a collective power. This was different from American comics such as Marvel and DC which follow a Judeo-Christian arch where the heroes have enormous power but are outcasts from the world. There is also the Japanese arch which Pokémon follows where smaller characters rely on one another to become powerful.  The 99 do have alter egos where they have their super names and their real names. Over 20,000 copies of the original comics have sold which outsold other comics in the Arab region except Superman and Spiderman editions (Santo). Mutawa’s work has inspired Marvel and DC comics to create more diverse characters. However, there are stereotypes that need to be confronted, but it is progress to have these new characters represent a previously ignored market.

What He's Done Outside of The 99

Dr. Naif Al-Mutawa began publishing The 99 in 2007 and in 2003 he founded Teshkeel Comics. Teshkeel Comics is a part of Teshkeel Media group which focuses on creating or re-engineering forms of children media for children in the Middle East. In 2005, Teshkeel Comics partnered with Marvel so that they could transcribe Marvel comics into Arabic for the children in Middle Eastern countries, or Arabic spoken regions, to be able to enjoy as well. 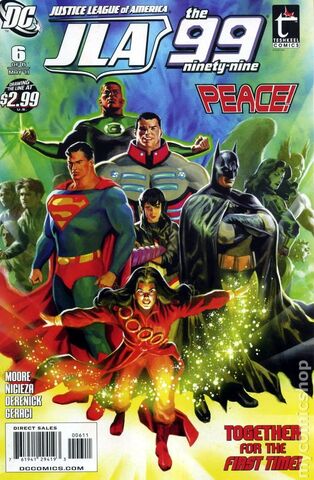 Cover art for the DC and The 99 comic book crossover.

Birth of The Noor Stones

Some of The 99 Heroes

Backlash in Changing the Future

"I want to send the message out that there is not only one way to be Muslim." 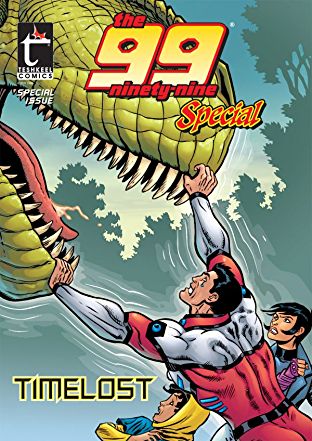 The angry, conservative hordes.
The backlash that Al-Mutawa has dealt with because of the success of The 99 has been astonishing. The series was banned in Saudi Arabia on its release and a fatwa (a legal statement issued by an Islamic religious authority) was issued by the Grand Mufti of Saudi Arabia, and only after years of legal battles was it allowed to be released. It has since been banned again, and Al-Mutawa is once again fighting for his creation in spite of the fact that he received a significant loan from a large Saudi bank with strong Sharia board members that in many people's eyes legitimized his project. He has also received death threats, both online and in the mail, from both Western and Eastern opponents. Despite a TV deal in the U.S., the show has not aired, in Al-Mutawa's opinion because of the fear of commercial and public withdrawal. To his credit, Al-Mutawa has plowed ahead, challenging his detractors to find something in the series itself that merits this sort of consternation and opposition. One of the major factors for rejection in the Arabic world is that some think his final plan is to connect all of the 99, thus creating an image of Allah, which is blasphemous in the Muslim tradition. However, Al-Mutawa has stated that he only wants to bring about 40 of the 99 into the series, as he agrees it would be blasphemous to have all 99. He understands that in order to make an impact he will have to put himself in danger, as any revolutionary must to make their idea heard.
“The idea was to reposition Islam not only to the West, but to Muslims themselves as well.”
Despite the large amounts of anger and fear directed at The 99, the commercial success that it has enjoyed has been astronomical. The TV show aired in countries all over the world from East Asia to North America and Europe, and in those places where it didn't make it onto live TV it still gathered a large cult following in the form of YouTube videos and the comics themselves. Ironically enough, the TV show was banned in Al-Mutawa's home country of Kuwait after the comics already had a strong foothold. A string of five theme parks is planned, with the first already built in Kuwait in 2009. A PBS documentary called Wham! Bam! Islam!  was broadcast in 2011, and at the Presidential Summit on Entrepreneurship in 2010 President Obama singled out Al-Mutawa and his work on the 99 as "one of the most innovative responses" to the issues of interfaith dialogue and religious discrimination, both of which provided a springboard for The 99  into the American public eye. Forbes called the series "one of the top twenty trends sweeping the globe" in 2008, and it has received rave reviews from many of the top publications in the country, including the New York Times, the Washington Post, and others.
“My message was very clear to investors: Muslim children need new heroes.”
The impact of Al-Mutawa's revolutionary idea is yet to be seen in any specific context, but the possibilities it creates for connecting young people of different backgrounds and historically opposing belief systems is unique. His insight into the human mind and behavior gives him a very powerful weapon in the fight for understanding and solidarity, and in a flash of inspiration in the back of a taxi he came up with the ideal premise for spreading his healing teachings to the population that would be the most effected by it. Kids love comics and they really love superheroes, so putting his ideas about Islam and acceptance into such a child-friendly medium in the form of characters that they can relate to and admire is truly a stroke of genius.

"We were giving children alternative role models whose values were universal in nature yet rooted in Islam. We were making a difference. And, finally, the global media was taking notice and reporting on the good within Islam." 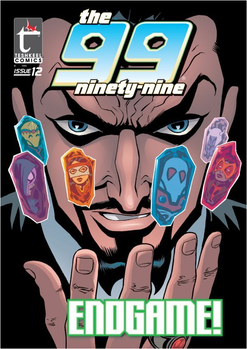