Life in a Warzone
by Chris Ellsworth
Far too often, stories of war are told from the perspectives of either side of the conflict in order to paint one side of the war as heroes and the other side as the villains. Rarely do we get the story told from the perspective of the innocent bystander. In two of her six graphic novels (A Game for Swallows: To Die, To Leave, To Return and I Remember Beirut), Zeina Abirached writes about her time living in Beirut in the 1980s. At the time, Lebanon had been in the middle of a civil war for years. Through the use of the graphic narrative medium, Abirached recounts her childhood in the midst of a warzone. These accounts serve as both a love letter to and an elegy for the city of Beirut.

Born in 1981, six years after the outbreak of the Lebanese Civil War, Zeian Abirached was confronted with the harsh realities of war on a constant basis, and in a very immediate way. There were parts of her neighborhood that were warzones. In fact, during periods of heightened conflict, the schoolbus would stop going through her neighborhood, and all of the children from that area would congregate at the border of that particular zone to be picked up. Zeina had a family friend who was a cab driver and would sometimes take the nearby children to school. After an understandably turbulent childhood, she went on to study Graphic Art and Commercial Design Lebanese Academy of Fine Arts, and later the National School of Decorative Arts in Paris, where she currently resides (Library of Congress).

Given that so much of her work is a reflection of her childhood spent in a warzone, a little background on the Lebanese Civil War seems appropriate. It was actually a succession of smaller wars that began with the Two Year War in 1975 and did not officially end until 1990 (though occupation continued until 2005 and political violence continues to this day).  While not necessarily a war of religious sectarianism, many of the battle-lines were drawn between Christian political sects opposing Palestinian sovereignty. During much of the period described in Abirached’s two graphic novels at hand, Beirut was divided in half with a demarcation line. 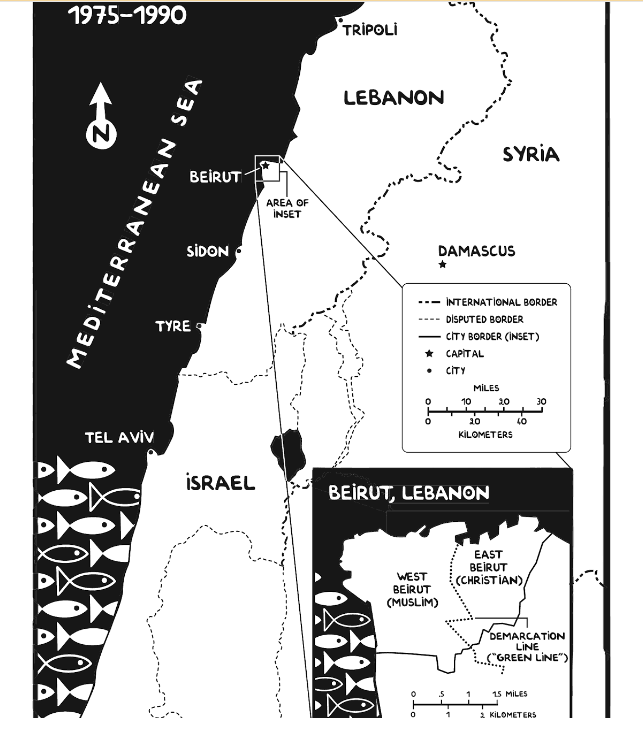 The images and maps that Zeina Abirached employs are a recurring theme in her work, and one that really separates the medium from other forms of written expression. In comics, the level of detail in an image, the perspective from which it is shown, the amount of emphasis or repetition of it and many other artistic choices can create profound meaning that text alone simply cannot do. Her focus on physical space is something that sets Zeina Abirached apart from her contemporaries. While she provides a map of the Middle East with the focus on Lebanon and Beirut, she also shows what her neighborhood looked like as a map. 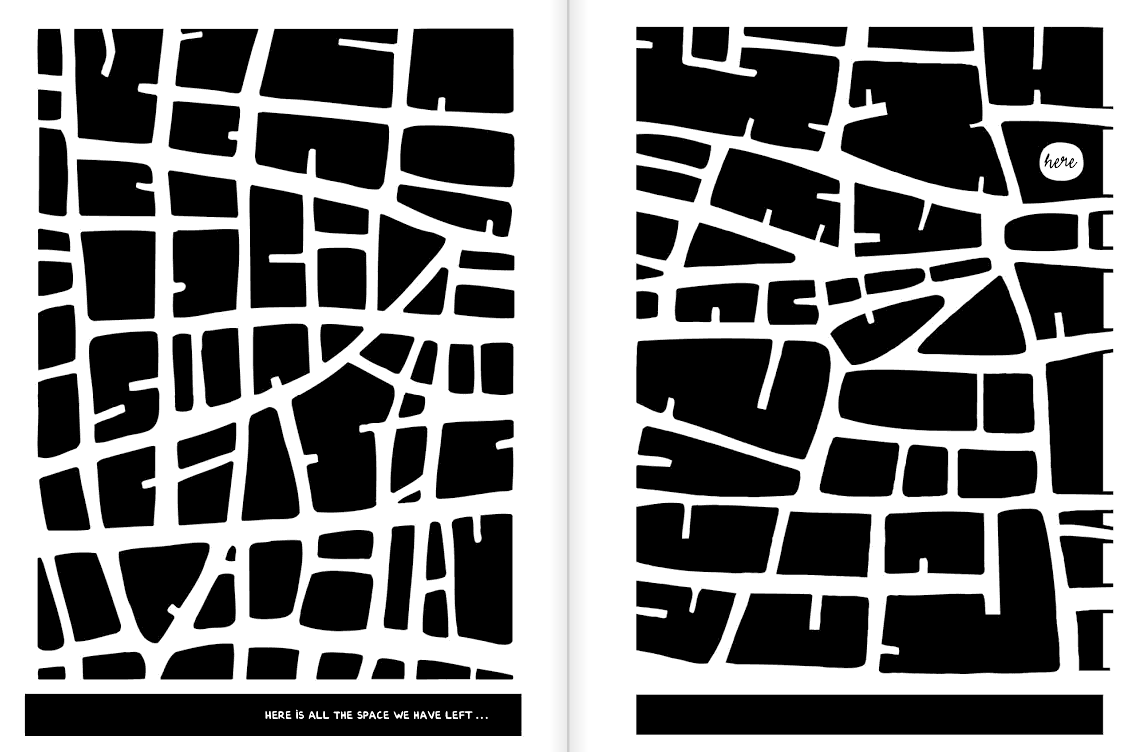 When she is recounting the stories of how her life was altered or influenced by the armed conflicts down the street, the reader can see down the street. The reader can know the details of her neighborhood far more intimately than if she used words or phrases. When she talks about having to get a ride to Ward’s Ice Cream Parlor because it was far enough away from the demarcation zone than her actual house was, the reader can see just how far that is, connect that distance to spaces they know just as intimately, and the danger becomes more real to them.
And so, in her novels, Abirached uses this technique to great effect. She provided the map above in both A Game for Swallows and I Remember Beirut at the very beginning. The differences between the two books are quite striking and complementary. In I Remember Beirut, it’s a very general account of her childhood. Things like who her neighbors were, what her parents were like, little pleasures of life and how the war impacted what would have been a pretty normal childhood are all explored in a whimsical, slightly tragic sort of way. However, in A Game for Swallows, Abirached recounts one harrowing evening when her parents went to visit her grandmother and were late coming back. 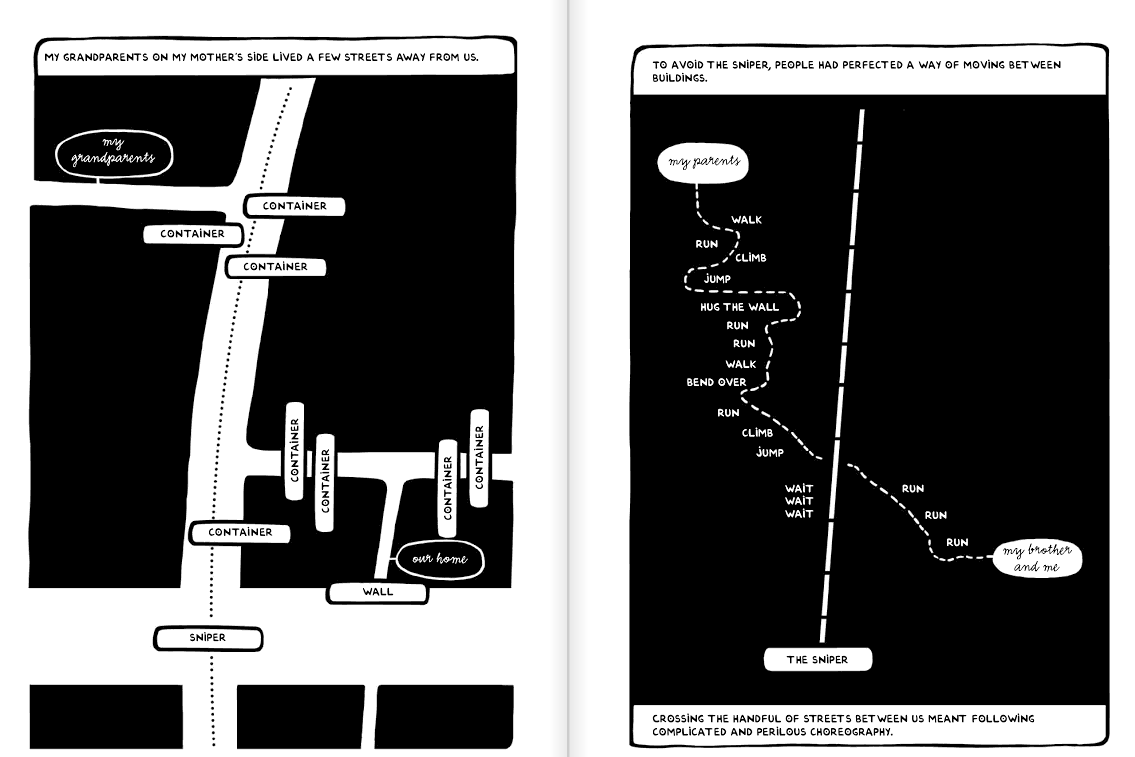 As the night progresses, the parents’ absence becomes more and more a cause for alarm. Neighbors stop by on random business or just to say hello, but end up staying to watch after the children. She details, through the same use of overhead maps, the shrinking of her world, as only portions of her family’s apartment were safe from mortar strikes or sniper fire. 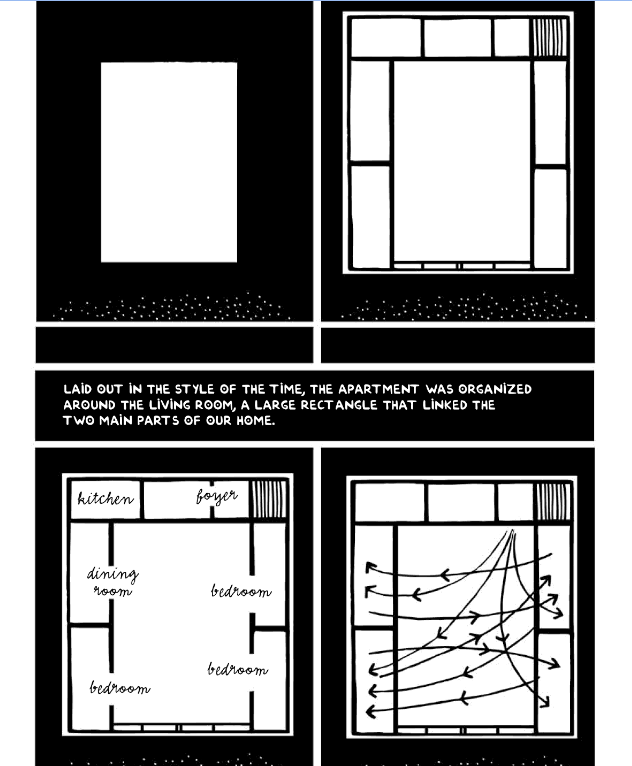 Sometimes, confined to such a small space as her foyer, her family would dine there, the kids would do their homework there, and they’d all sleep there. 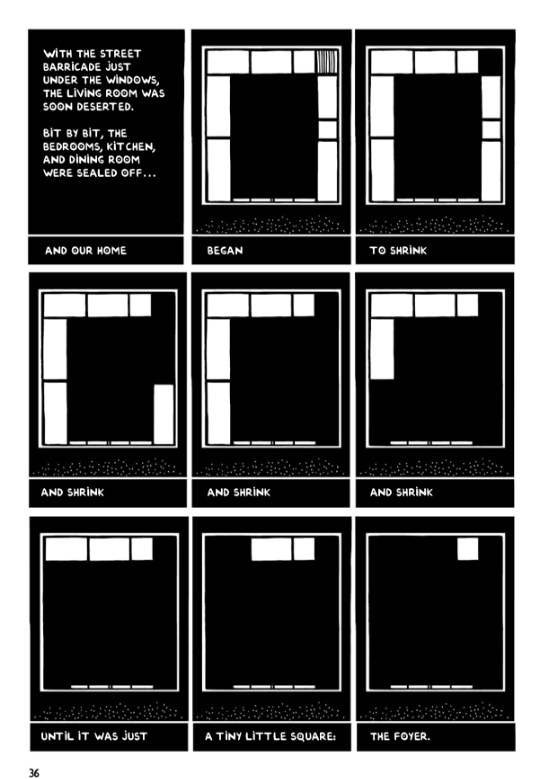 Giving physical space on the page to the physical spaces of her life, the readers are oriented and these scenes of gripping tension and fear become much more palpable. Now, however, with modern technology and satellite mapping, we can use some of the street names in Google Maps to zoom in and see the real places that she is referring to, heightening this effect even more. Below is a map of Beirut using Google Earth images, and it shows the location of the old Ward’s Ice Cream Shop that was used as a bus stop.
In her other works (not yet available in English), Abirached continues with the theme of physical space. At a reading at Duke University, she uses fold-out paper to show off locations from her life. One examples is about her apartment building and it folds out to reveal stories about the people that lived within her building in Paris. Not only has she lived a challenging and interesting life which she has capably committed to paper through words and imagery, but she has done so in a unique style.
Trina Robbins, an American cartoonist, provides the introduction to A Game for Swallows. In it, she quotes the Edwin Starr song “War”. While her work remains relatively light-hearted throughout, and never truly takes a hard anti-war stance, it is difficult to take anything but an anti-war message away from reading her autobiographical material. Her work is frequently funny, insightful and tragic, with a style reminiscent of Persepolis by Marjane Satrapi, but Abirached finds her own voice and style in relating her experiences.
For more of Zeina Abirached, including an animation of her work, see her publisher's YouTube page.
Sources