Arabic Comics: From Past to Present

In the Arab World, comics were introduced and still are heavily influenced by the Western world, they were particularly influenced by both France and Belgium, who are responsible for the expansion of Comic art in the Arabic world. They did so through the introduction of many classic comics such as TinTin, Little Lulu, Disney, Asterix, Obelix, and many more; they were first printed in French but soon were translated in Arabic script. As comics continued to come from the West Arabic writers began to learn more about the form and content of comics and soon decided to delve into the world of Comic Books and Comic Strips by developing their own comics.

Arab comics came to recognition in the early 1920s, where local artists would create political cartoons. Often caricatures of personalities and politicos were common features of broadsheets. One of the first Arab magazines that incorporated cartoons into their work was Al-Dabbour. Al-Dabbour was founded in 1922 and published political commentary similar to its European and North American counterparts. A few years later the idea of Arab comics began to spread. Magazines such as Dunia al-Ahdath and Samir began to make their own prints in the mid-1950s. These two magazines became hugely influential for the Arab comix movement.

​Dunia Al-Ahdath, translated to “The World of Youth”, is considered the first Lebanese comics magazine, which was founded in 1954. The founder, Loreen Rihany, and her husband were active in many organizations that promoted Lebanese cultural institutions. Their magazine was modeled on the earliest Arabic children’s comics from the 1940s and 50s and was distributed in Lebanese schools. Dunia Al-Ahdath would post bi-weekly and was used as a way to help children master the standard Arabic educational content. It would soon show that this particular magazine, along with Samir, would play a central role in the history of modern Arab comics.

Samir was founded in 1956, shortly after the 1952 revolution, and was published by the government-owned Dar al-Hilal. Samir quickly became the most popular comics magazine in the Arab world in the 1950s and 1960s. Much like Dunia Al-Ahdath, Samir was used to showcase the magazine’s mission of educating Egypt’s young citizens in a nationalist mold. Most of these comics were based around heroic characters, both new and old. Some of the recurring strips featured characters created from local contexts, such as Basil, a young adventurer who battles networks of smugglers to protect Egypt’s borders. Some strips would draw on internationally known characters such as Alice in Wonderland and Mickey Mouse. A lot of these particular comics would reveal how racialized colonial stereotypes reappeared and were re-adapted in the Egyptian and Arab contexts. Along with educating the youth, Samir would include vignettes and biographies or influential historical figures, along with the events and aftermath of the 1952 Egyptian revolution. As this magazine began to metamorphose, it would take a more critical turn. The renowned Egyptian political cartoonist, Ahmed Hijazi, joined the magazine in 1956. He played a key role in reshaping the nature of the magazine in the 1950s and 1960s. Hijazi's work would often satirize Egyptian politics and Egypt’s class culture.

A few years after Samir sprung up in Egypt, Bassat El-Reeh was published in Beirut. As early as 1964, Superman in Arabic appeared in bookstores, and shortly after weekly translated editions of Superman and other westernized heroic characters became stapled of children’s reading diets. In an ecosystem of comics and characters, the opportunity for experimentation presented by alternative comix was a natural step.

The shift of comics to comix was during the Lebanese civil war. The political atmosphere after the civil war created loads of tension. Lebanese political cartoonists unpacked narratives of geopolitical strife. One particular artist emerged from this era and began to apply the comic lens to grown-up themes. This artist was known as George “Jad” Khoury and he created the 1980 album Carnival, a three-act dream of the war, which was certainly a milestone for Arab comix. Jad sought a tool to transcend traditional journalism, and his shift within the comic world was much more than technical adjustment. Most of his stories were found rooted in conflict.
​
As of today, Arab comix are still continually being published and are rising up in popularity. In 1997, a Lebanese university known as Academie Libanaise des Beaux-Arts made it possible to obtain a master's degree in illustration and bande dessinee. The comix community continued to expand, and by 2007 a new comix magazine, known as Samandal, was founded. By 2013 Samandal had already published their fifteenth addition. As their popularity grew, they began to publish more magazines yearly. Within the year of 2019, they had published four different magazine issues. 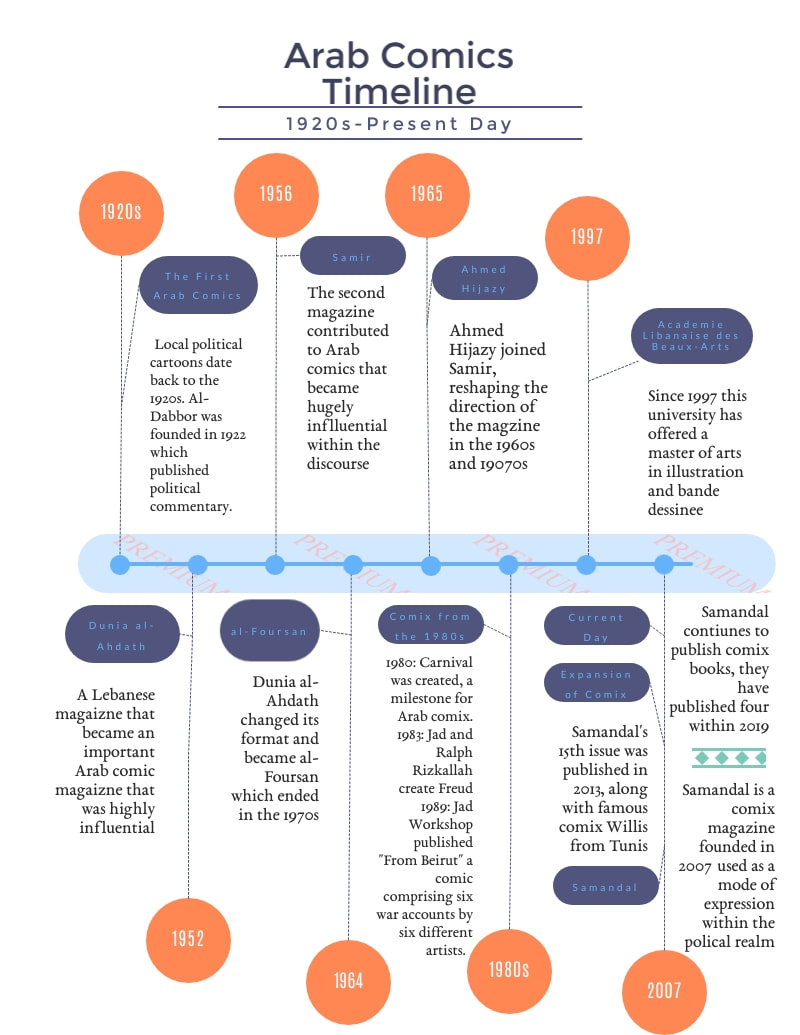 “I don’t remember when exactly I read my first comic book, but I do remember exactly how liberated and subversive I felt as a result.”
— Edward W. Said, Palestine (Fantagraphics, 2001)