A Brief History of Web Comics

The first comics were shared on the web in 1985, with Eric Monster Millikin's Witches in Stitches issued through CompuServe, the first major commercial online service provider. Of course, web comics' popularity didn't pick up steam until the Internet did, in the late 90s to the early 2000s. Since that time, the tradition of web comics has proven itself indispensable to modern day art and entertainment. Mr. McElfatrick's Cyanide and Happiness is one instance of a web comic that emerged from this golden age of the internet and which still endures today, almost twenty years later (Garrity, Dale).

On the authority of James Bucky Carter in his article "Graphic Novels, Web Comics, and Creator Blogs: Examining Product and Process," web comics explore uncharted territory by defying "monospatial" concepts of the normative relationship between creator and reader (190-1). Increased accessibility means audiences can be reached with more immediacy. Scott McCloud builds on this idea in his book Reinventing Comics: "Whether by choosing a path, revealing a hidden window, or zooming in on a detail, there are countless ways to interact with sequential art in a digital environment" (qtd. in Hodgson). Web comics are innovative in that they entwine with a tighter community, and have dynamic, interactive visual potential.

Whereas in the past, getting published in print was the benchmark of success, publishing work online is now a more satisfying option than doing so in traditional print form in some cases, especially for artists in Arab countries. According to webcomix artist Deena Mohamed, the Internet provides a "sole source of education, promotion and work all in one" for many living in Egypt. The Internet has been vital to Mohamed's artistic practice. Not only is it where she posts her art, but it has been key to her artistic education, thanks to drawing tutorials and other tools. Most importantly, Mohamed "would have never, ever been able to reach the audience I did" if she hadn't made the decision to work within the online format (qtd. in Aleya).

Anna Gabai concurs that the future of comix is online. Producing comics digitally and distributing them through social media, she argues, "enable[s] artists to network and remain in a state of constant exchange" even while remaining anonymous. The intimacy provided by digital infrastructure can protect artists evade the threat of censorship, since web publishing can be independently done for free (see also Censorship & Prosecution).

Web Comix Across the Arab World 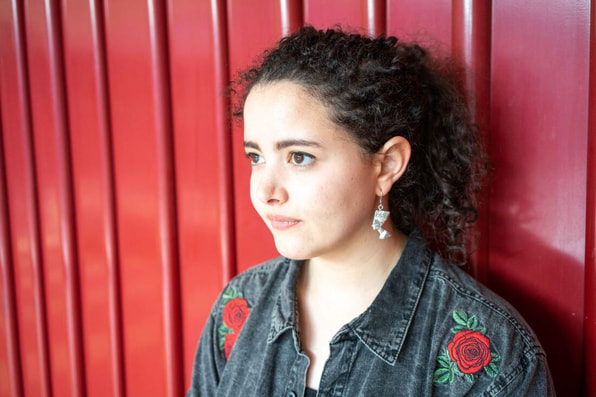 Source: Al-Fanar Media
Deena Mohamed is an emerging Egyptian web comix artist whose work elevates a Muslim feminist message. Her most eminent web comic, Qahera, revolves around a witty superhero after whom the title is eponymous. The Arabic word “Qahera” contains multiple meanings relevant to the titular character's rebel personality, such as “conqueror,” “omnipotent,” “vanquisher,” and “victorious.” In conceptualizing Qahera, Mohamed “wanted to create a superhero to face some of the things that frustrated me," sensing an urgent need to represent "female Muslim superheroes who actually deal with the real-life issues we face instead of fictional supervillains (because let’s face it, half of the things Muslim women have to deal with feel like they’ve been concocted by supervillains)” (qtd. in Aggarwal). Her intended audience were young girls (Ivey). However, Qahera has inspired people of all ages and genders.
​

"...half of the things Muslim women have to deal with feel like they’ve been concocted by supervillains."

Mohamed has a sincere desire to use her comics to educate, demonstrated by her working to the point of fatigue: "I feel like one of my main problems is that we continue to have the same conversations over and over. Yes, Muslim women can be feminists. Yes, veiled women can be superheroes. Yes, some veiled women are forced to wear it. Yes, forcing them to take it off is bad too" (qtd. in Aleya). In her keynote speech "Islamophobic Nationalism in the U.S. Racial Landscape," ethnographer and educator Dr. Nazia Kazi agrees with Mohamed that the problem is not Muslim women wearing hijabs. Instead, it's the Western assumption that Muslim women are 'uniquely' oppressed, and America's colonialist projects are somehow going to save them. This problematic attempt at gender justice conceals racist intentions, and goes hand in hand with white savior ideologies. The real issues that keep Muslim women in subjugation are global: patriarchy, classism, and capitalism. Therefore, Qahera's superpowers come out of her self-identification as both feminist and religious. She demonstrates that these two identities can walk shoulder to shoulder together in empowerment.

Interestingly, Mohamed does not “consider [her]self an activist” (qtd. in Aleya). As an educator who does not face daily violence and prosecution, she is against the idea of overstating her impact. She vehemently rejects the idea out of respect for frontline activists. "People tend to assume the comic is some kind of brave form of resistance and it's not" in comparison to the efforts of protestors, she repeated to Lissy Kleer and Clara Taxis. Here, it is important to note that Qahera was first created in 2013, soon after the Arab Spring uprisings. Mohamed says that she "wouldn't have made this comic without the 2011 revolution" (Kleer).

Thus, her humble renunciation of pop culture activism is grounded in profound appreciation for the activists who put their bodies on the line. At the same time, like their direct action, Qahera is also a response to the revolution and therefore must be seen as part of that movement. "We all had this desire for change, and of wanting change and trying to accomplish it, that I created this character [Qahera] that fights for things, which was very much part of the revolution," she acknowledged in another interview (Singh). In her desire to change things for the better, Mohamed has also contributed to and helped shape the revolution. Although Arab Spring ended, her comic did not--Qahera is still in production today.

"I wouldn't have made this comic without the 2011 revolution."

​In concurrence, Dr. Christina Ivey holds up Mohamed's work as a powerful form of protest, attesting that it fights epistemic violence. The postcolonial studies term "epistemic violence" is used by Ivey to articulate how the West's aforementioned pseudo-knowledge of the Arab world becomes its presumption of power over it. Although this "would not ordinarily be thought of as violence: it is too respectable, too academic, too genteel for that," as Andrew Norman points out, "[i]t is violence all the same, and deserves to be seen for what it is” (353). The dominant representation of Western feminism is part of this problem, and Qahera ​responds to this. Its dissentient message against stereotypes equating muslim women who wear the hijab with helpless, oppressed victims subverts the islamophobic lens of the popular feminist group FEMEN.

In one installment, Mohamed depicts FEMEN trying to take off Qahera's hijab, saying "Sister! Take off your oppression and join us," ostracizing an entire culture of women in ignorance of their own privilege. Qahera's eyes are artfully rendered to appear formed of fire in anger at this bigotry. However, Qahera responds coolly, stating, “Hey, so feel free to rescue me anytime. The question is, who’s going to rescue you?” (qtd. in Ivey 386). "With the Femen comic I wanted to say that the problem is not religion. It's patriarchy. You cannot claim to be on someone's side and then try to change them and totally disrespect their way of living. I created Qahera to complain about things within my culture but it's not an invitation to attack my culture," Mohamed explained (qtd. in Cuthbert).

A core issue Mohamed addresses is the refusal of dominant white feminism to recognize the ability of women living in patriarchal cultures to subversively fight against misogynist norms. "There are thousands of double standards with regards to misogyny both locally and in the West," Mohamed pointed out. "The sooner people realize that it is a worldwide problem the better, because it prevents small-minded critical thinking that blames issues on individual beliefs or cultures when in reality patriarchy is global, just with varying forms" (qtd. in Aggarwal).

Along with islamophobia, Qahera combats sexism. She does this in humorous yet message-driven ways--for instance, hanging people up on clothing lines when they make misogynist comments about women doing laundry. Also, after reporting catcallers to the police, she makes sure they can be identified from a mile away using signage that says "these men are perverts" (qtd. in Aggarwal). In addition to calling out those with sexist beliefs and making them think twice about their actions, Mohamed wants her readers to know that harassment can only be prevented by placing the blame on the perpetrators: 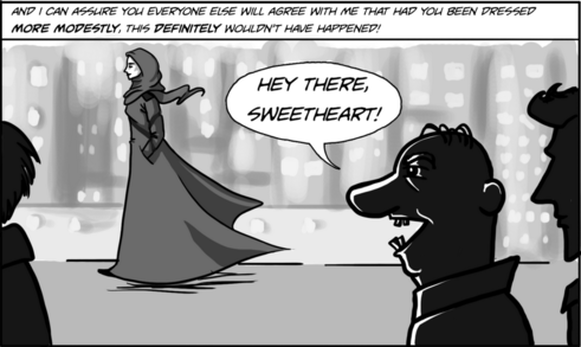 From her blog, in response to a perplexed commenter: "thank you, but the hijab is absolutely not meant to help prevent you from getting sexual harassment from men, and it literally does not prevent you from getting sexually harassed by men. the entire country of egypt is proof of this. in fact, check out this snazzy panel juxtaposed against exactly what you were saying."
​
​Mohamed describes to Vice how this strip inspired a new direction in her work, expansion of her audience: "It was only after I'd made the one about sexual harassment that the content changed quite suddenly. It went from being an online joke to a more Egypt-based strip with more Egypt-based social commentary, especially because that was when I started posting it in Arabic" (Rowsome). By publishing in English as well as Arabic, Qahera engages with the discourses of both Egypt and the West. Mohamed has gotten flack for this. Some readers disagree with her choice to embrace the Western concept of a superhero. However, Mohammed fully believes in it. "We are all exposed to the idea of comics and superheroes. We are exposed to Western media so often. So I guess I was just responding to that in my own way," she told BBC News (Demrdash). Mohamed's response to the predominantly white, male convention of the superhero is to use it in new situations that pose a challenge to its associated identity. Her misappropriation of the superhero figure therefore should be lauded as forming the core of Qahera's feminist politics.