Metro A Story of Cairo
A story of pilgrimage 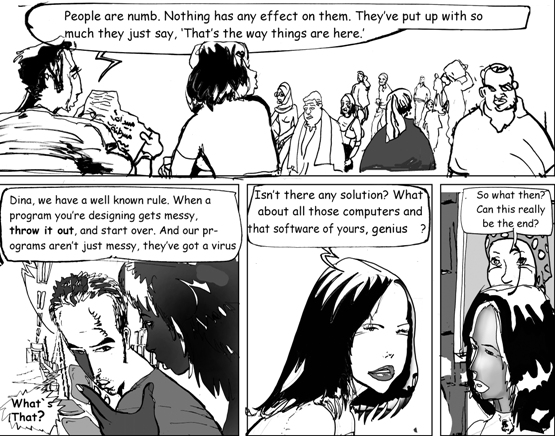 ​
On this page and many throughout the novel we see how corruption within the police and justice system effects the characters in the novel (26).

Dina, Shehab's girlfriend, is attacked while she is walking alone on the street. Although she is aided by Shehab and the attackers are chased away she is still shook. Despite Dina's concerns Shehab lets the men go, and tells Dina that it would not matter if they reported the incident to the police. He tells her this because the police may have been the people that have sent the men to attack her.

​A quarter way through the graphic novel Shehab finds himself in a dilemma involving the police. He and Mustafa have both witnessed a murder in one of the tunnels in their town. The man who has been murdered is their neighbor and local business man Hagg Misbah. As the murderer is stabbing Hagg he yells, "This is a message from the men upstairs" (23).

​Even though Mustafa and Shehab both know the identity of the man that has stabbed Hagg. They express that they are both too scared to go to the Police for fear that they will be persecuted for their debts, or even worse, the crime. Magdy uses this situation to show that the people of these cities feel that they are powerless. By keeping these people fearful of the police they establish power to do as they please. Eventually Shehab comes around to his senses and decides that he should come forth with the information that he has about the murder, but not before he investigates the situation himself.

Publishing a novel in a country with censorship laws can be difficult. El Shafee has not been the only artist that has faced this dilemma when trying to publish work. There are many authors on the same side as El Shafee, that are constanlty being ridiculed, arrested, and charged for the work that they are doing. Through attending public demonstrations, to serving time for his graphic novel  El Shafee has fearlessly begun paving the way to a door worth opening. Originally the novel was banned for "offending public morals". The page that ultimetly led to the banning of Metro was  a page containing sexual content. Although this is the offical reason for banning Metro,  many have commented on the social realism and critiques of Egypt that may have led to the loss of the case against ​Metro.

Magdy El Shafee: There is currently a Lebanese edition, and another is on the way, but the Court of Appeals in Egypt has outlawed the reprinting of Metro inside the country.
– هناك طبعة لبنانية الان و أخرى فى الطريق و لكن داخل حدود مصر يعتبر اعادة طباعتها -خرقا للقانون- حسب قرار محكمة الاستئناف.

AL: Are you afraid of censorship when you write now? Is it on your mind? More now because of Morsi?
انت بتخاف من الرقابة لما بتكتب ؟ الموضوع فى دماغك؟أكتر عن الحساب الرئيس الجديد؟

MES: The censor to get rid of is the one in my head. That is the most dangerous kind of censorship and all of us must work on its demise. Neither Morsi nor anyone one else will stand in the way of the destruction of  that  monster.
لرقيب بتخلص منه الرقيب اللى فى دماغى هو الأخطر و علينا ان نعمل جميعا للقضاء عليه تماما و مرسى او غيره لن يقف فى طريقى للقضاء على ذلك الوحش الخرافى

MES: All in all, I am continuing with my work, and I’m not  worried about censorship. Anyone who thinks that he can censor me because he knows what’s in my best interest or that of other people needs his head examined.  Enough already with treating people as though they were unthinking children or idiots who need to be watched over.
​ عموما انا مستمر ف شغلى و لا يشغلنى موضوع الرقيب ..اى واحد يفكر انه رقيب عليا لأنه فاهم مصلحتى و مصلحة الناس اكتر منهم يبقى محتاج لعلاج.. كفاية بقى التعامل مع الناس من فوق على انهم اطفال قاصرين التفكير أو بلهاء
يحتاجون الرعاية الفكرية.

"For proof of the power of comics, look no further than Metro... It is not hard to see why the dictatorship was alarmed by the novel. In a deft black-and-white portrait of Cairo and its neighborhoods, a thriller unfolds along the metro system, giving a powerful insight into why the revolution took place.” --Newsweek

“There are twists and turns, murders and shadowy conspiracies… The Byzantine plot is saturated with a political commentary on the state of today's Egypt, depicted as a deeply dysfunctional country whose citizens take government corruption and repression as a given.” --The National (Abu Dhabi)
​
“A visual record of the zeitgeist, filled with poverty, sexual frustration, corruption, and abuse… Part thriller, part love story, part socio-political commentary.” --Daily News Egypt